Mexico have been crowned CONCACAF Gold Cup champions four times in the last six renewals and look on course to reach the final again.

Canada head into this semi in good spirits but are 59 spots lower down the FIFA rankings and that gulf in class is expected to tell in Houston.

With El Tri yet to concede a goal in this tournament, 13/10 for them to win to nil is our first Mexico vs Canada prediction.

A Look At Mexico’s Betting Odds

Mexico got off to a sluggish start when drawing 0-0 with Trinidad and Tobago in their Group A opener but have been clinically efficient since then.

Top spot in that pool was secured following a 3-0 drubbing of Guatemala and a 1-0 victory over El Salvador.

Honduras were then ruthlessly brushed aside 3-0 in the quarter-finals, with all of those goals scored before the interval.

Argentina-born striker Rogelio Funes Mori has come to the fore with a trio of goals, while Orbelin Pineda has bagged a brace from midfield.

Gerardo Martino received a blow when Napoli winger Hirving Lozano picked up an injury but still has a strong squad.

Looking at the Mexico vs Canada odds, we like 7/5 for El Tri to lead at half-time and full-time.

A Look At Canada’s Betting Odds

Canada made it nine wins from 10 outings this year when claiming a 2-0 victory against Costa Rica at the last-eight stage.

Former Cardiff winger Junior Hoilett broke the deadlock on 18 minutes and Stephen Eustaquio gave them some breathing space in the second half.

The Canucks, managed by Englishman John Herdman, earlier secured 4-1 successes versus Martinique and Haiti in Group B.

Those results followed on from a series of World Cup qualifying wins, albeit against limited opposition.

However, they did end the pool stage with a 1-0 loss to the USA and may just have their limitations exposed again here.

Let’s finish off our Mexico vs Canada betting tips by taking 6/1 for El Tri to oblige 2-0. 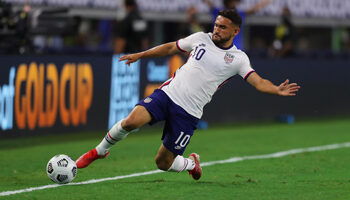