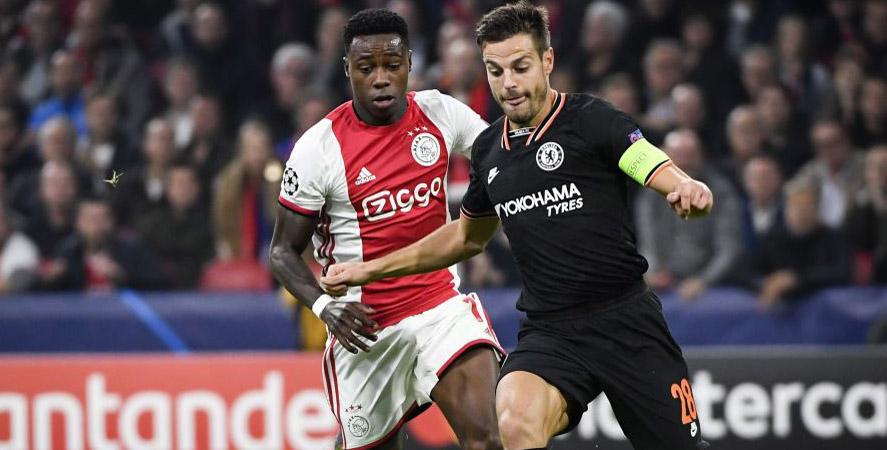 Chelsea deserve great credit for their 1-0 Champions League triumph over Ajax in Amsterdam, but that Group H contest could easily have gone the other way.

The Dutch giants earlier had a goal ruled out by VAR for the tightest of offside calls and hit the woodwork in a frantic, tetchy encounter.

Another tight tussle is anticipated at Stamford Bridge and 12/5 for a draw in London is our initial Chelsea vs Ajax prediction.

A Look At Chelsea’s Betting Odds

Chelsea have been involved in a trio of hard-fought affairs in this pool and will be more than content with a couple of wins at the halfway stage.

The Blues kicked off with a 1-0 loss to Valencia at this venue, before shading a 2-1 verdict at Lille and then edging out Ajax.

Michy Batshuayi came off the bench to fire his side to a memorable victory in Amsterdam, netting four minutes from time to make amends for a shocking earlier miss.

As already stated, Frank Lampard’s young side rode their luck at times, but grew in stature as that contest wore on.

“I’m delighted with every element of the performance,” said the Blues boss. “That’s the blueprint. There are no excuses for us now. That’s the standard and we can’t drop it.

“The young players are still babies in terms of Champions League minutes, so this was a huge test for them.

“But there was a good balance of youth and experience, so we need to realise the things that made that happen, because Ajax are a top, top team.”

However, Lampard added this week: “I said at the start that this group would be tight, because all the teams could take points off each other. That has been proved to be correct.

“We’ve had two good results and another one would be great for us with two games left.

“But we must understand that, even though we are at home now, the quality and the danger from Ajax is as much, if not more, than the game we played away, because they are such a good, technical team.”

On overall evidence there isn’t much between these sides, so 9/2 for the scores to be level at half-time and full-time on this occasion appeals from the Chelsea vs Ajax odds.

A Look At Ajax’s Betting Odds

Ajax had started out the group stage in fine fashion, with last season’s semi-finalists beating Lille 3-0 on home turf and then prevailing by the same scoreline away to Valencia.

It could have been different against Chelsea had VAR not spotted that Quincy Promes, or at least a microscopic part of him, was offside before he slid the ball home in the first half.

Edson Alvarez then grazed a post in the second period, before Batshuayi’s late strike stunned the Amsterdam faithful.

Captain Dusan Tadic declared: “I think it was 50-50. Chelsea are a good club, but we can do better.

“We were sloppy and made easy mistakes. Now we have to focus again on the next game.”

Ajax did manage to draw at PAOK Salonika and Apoel Nicosia during the qualifying rounds, while they were unbeaten in nine away matches in this competition last term.

That sequence included wins at Real Madrid, Juventus and Tottenham, plus a 1-1 stalemate against Bayern Munich in Germany, so this youthful outfit does not suffer from travel sickness.

Let’s take 13/2 for a repeat of that last scoreline to finish off our Chelsea vs Ajax betting tips.

Liverpool vs Genk: Visitors may now be more up to speed
Atalanta vs Man City: Blues can do the double over La Dea
Author

AC Milan vs Celtic: Hoops to have a go at the San Siro